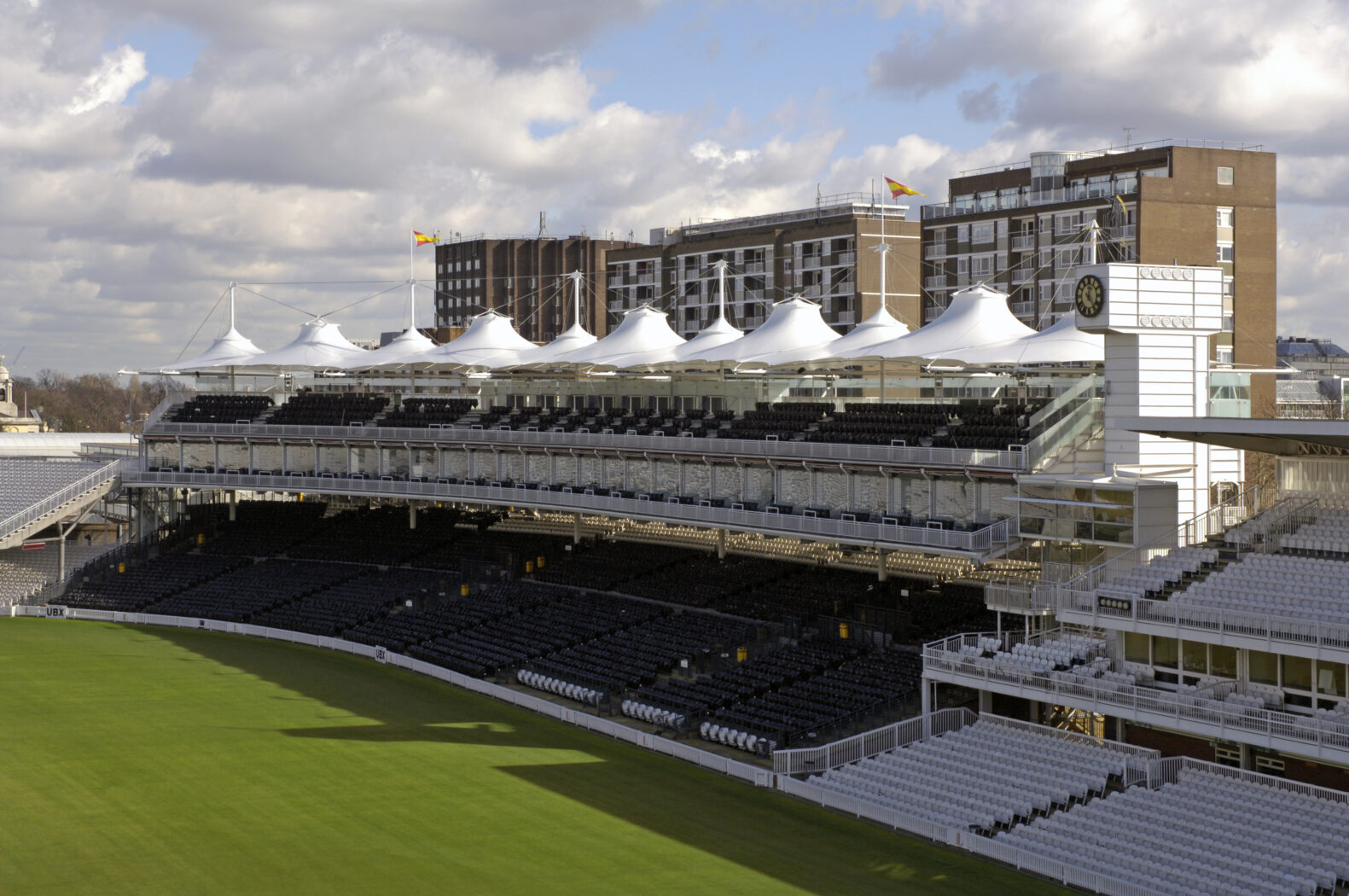 Lords cricket ground, owned by Marylebone Cricket Club, is regarded as the world wide spiritual home of cricket. To ensure the Ground remains not only world-famous but a truly world-class sporting venue, a multi-million pound overhaul was undertaken, part of which included the upgrade of the Mound Stand canopy which after eighteen years of sterling service had reached the end of it’s designed life span.

We were briefed by Capita Symonds, the appointed representatives of Marylebone Cricket Club, to remove, redesign, manufacture and install the new tensile fabric roof over the Mound Stand, a monumental task that would not simply replace the old canopy but provide significant structural improvements through the use of more advanced materials and up-to-date design detailing. As such the replacement canopy would be expected to last significantly longer than the old one.

A fundamental part of the contract win was our ability to ensure the recycling of the old canopy and so we partnered with Serge Ferrari (suppliers of the fabric for the new canopy), who have developed and built the Texyloop PVC recycling factory in South Eastern France. The recycling of the old canopy led to Base Structures achieving a finalist Building award for Sustainability in 2006.

Base Structures were able to provide the client with a methodology that ensured we would meet the tight deadlines, budgets and planning restrictions. This was made possible through the accurate surveying of the existing structure to ensure the replication of the iconic shape, and through the use of innovative access methods. It was essential that the project was undertaken and completed in one closed season so that our works did not interfere with or delay scheduled cricket matches.

Out with the Old

The first task was to remove the old canopy, in itself a huge job. The biggest problem faced by our team concerned how to fully access the canopy structure as it overhangs a busy main road and is closely neighboured by residential buildings.

The solution we identified required the use of Working Platform Nets. These netting systems are engineered to ensure the safety of the operatives working on and below them is not compromised and they proved to be incredibly cost effective by reducing the man hours needed working at height, when compared to traditional means of access such as scaffolding. Once the netting was installed by our fully qualified rope access team, non-IRATA trained personnel could then access the work areas in complete safety. The old canopy came down surprisingly quickly once the netting allowed easy access to the structure, especially considering the amount of fabric involved.

Next a detailed survey of the existing steelwork enabled our design department to accurately recreate the iconic structure within our specialist CAD software, from which we produced the cutting patterns and finalised the detail design.

It was necessary to redesign and upgrade all the fixtures and fixings on the existing structure to take into account advancements in tensile fabric over the previous eighteen years, ensuring that they were all brought up to current best practice standards. The new PVC membrane itself was a higher specification fabric than the original canopy, using higher quality PVDF lacquers to guarantee a longer life span. As part of this extensive upgrading process all the existing structural steelwork was repainted before the new canopy was installed.

In with the New

The old canopy was originally made in sections that were joined together using metal fixtures. Taking advantage of the opportunity to redesign the canopy and to improve the aesthetics, the new 1400 sq metre fabric membrane was manufactured and installed as a single piece of fabric. This improvement resulted in no site joints along the front of the canopy, significantly enhancing the overall appearance.

The entire project was successfully completed ahead of schedule and below budget, no easy task considering the scale and complexity of the project. The replacement canopy not only restored the stand to its former glory but also improved the aesthetics and expected life span of the structure. Marylebone Cricket Club were extremely happy with the refurbishment and continue to use Base Structures for regular maintenance of this most iconic of structures. 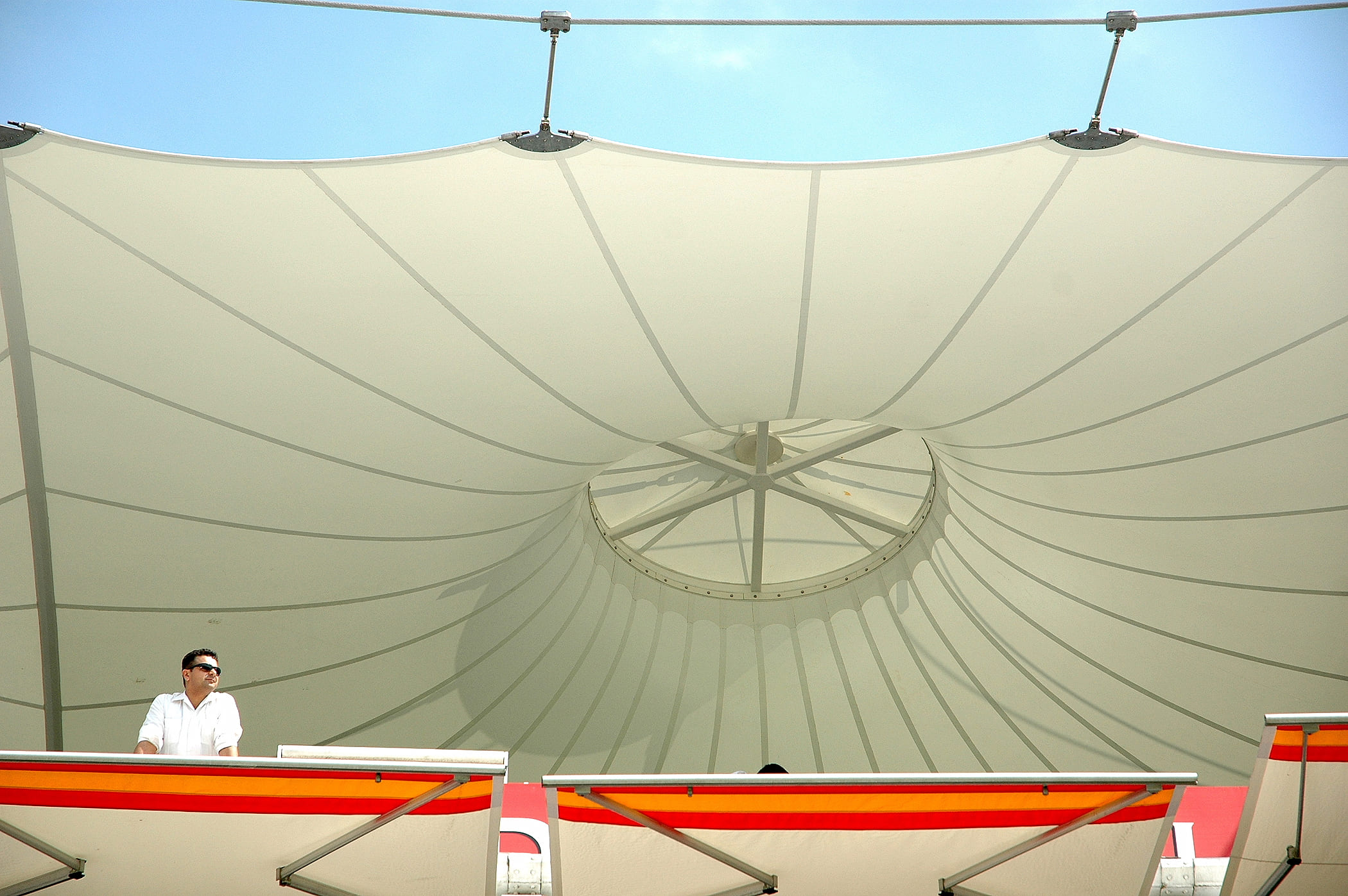 “We are all immensely proud of this landmark project, to deliver it despite the challenges of poor access, complex geometry and a tight budget. Producing a very high quality result was a marvellous achievement, only possible because of teamwork and the importance of being customer and quality focused.” 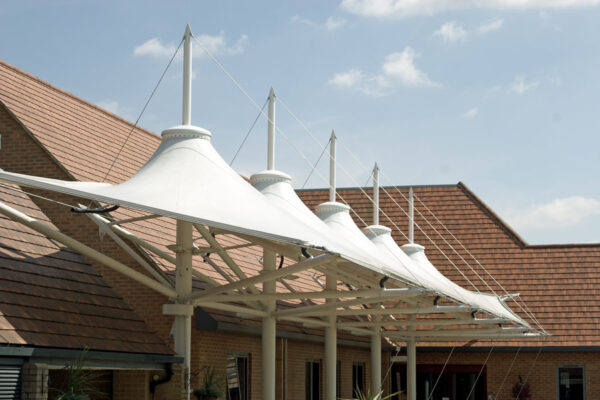 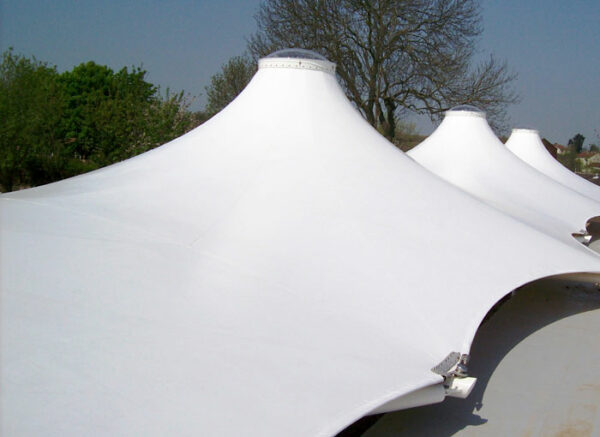 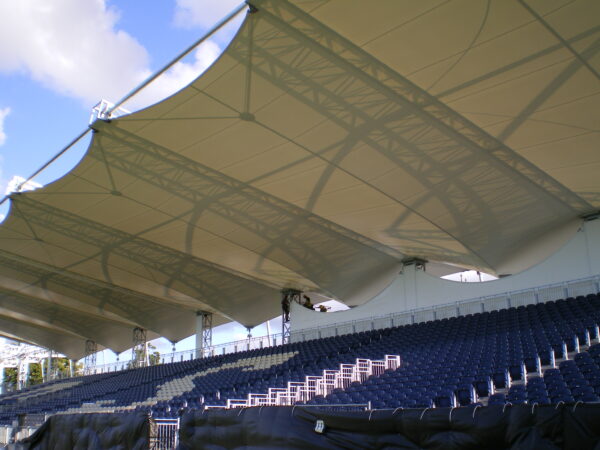