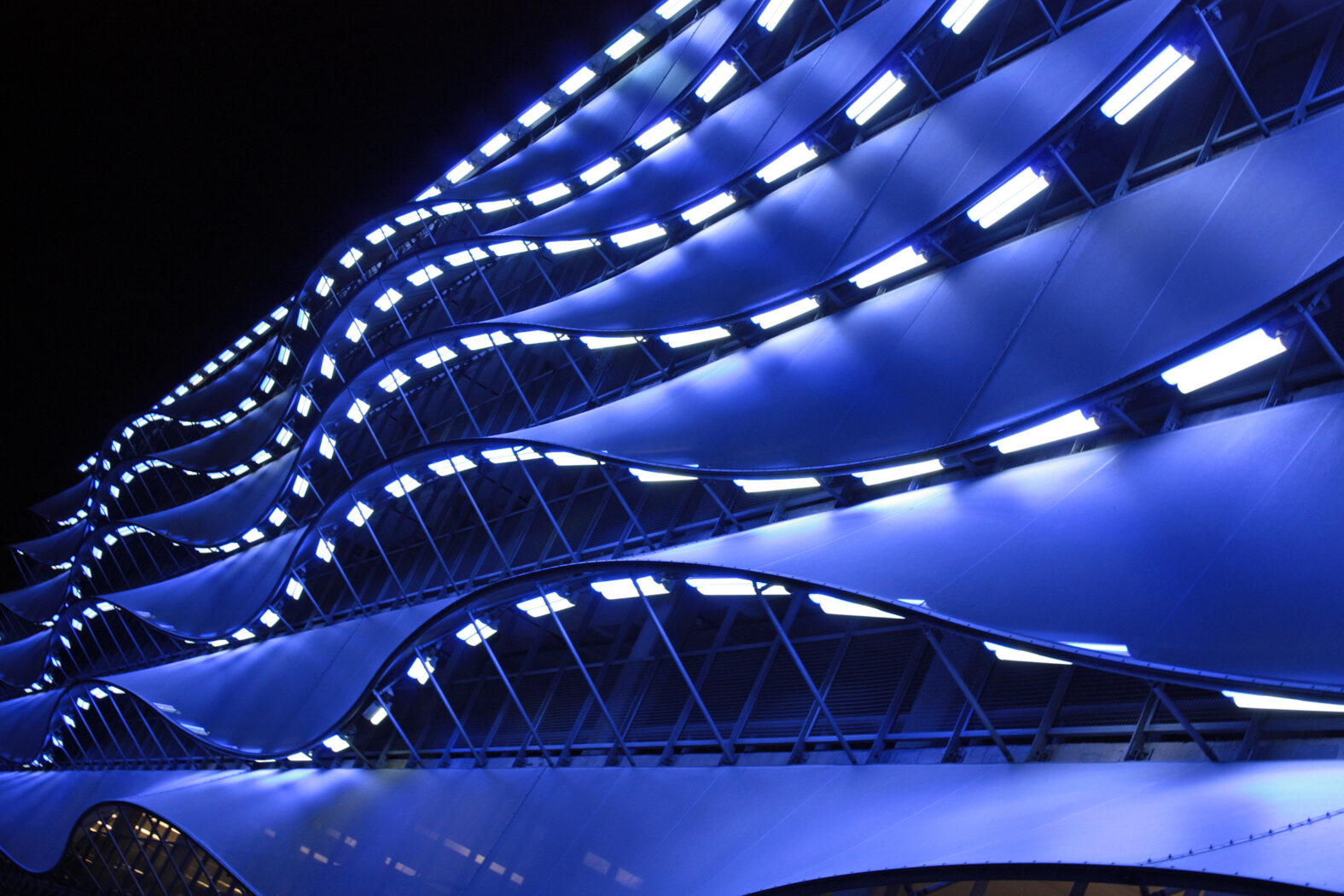 Cardiff Bay is Europe’s largest waterfront development. The Bay area was created by the Cardiff Barrage, one of the largest civil engineering projects in Europe during the 1990s and the subsequent  regeneration of the area is widely regarded as one of the great success stories in the United Kingdom. As part of the continuing success story of Cardiff Bay, a newly built 1238 space multi-storey car park in a prominent location required status as a landmark building. The £11m car park was the first phase of a £150m development and utilises cutting edge 21st century design to reflect the rich nautical heritage of the area.

The rectangular, box like car park was to be completely transformed by a series of six 120m long scalloped tensile fabric ribbons running parallel across the entire width of building, a stunning contemporary design by Scott Brownrigg Architects. The pulsing waves of fabric cascading down the front of the car park bring an otherwise unremarkable building, formed entirely by it’s function, dramatically alive with movement and a dynamic flair that most car parks could only dream of! Base Structures were approached by main contractor McAlpine Construction to use our specialist skills to detail design, manufacture and install the tensile fabric structure and lighting system.

Base Structures were selected to bring this vision into reality due to our proven expertise and excellent relationship with the main contractor. As well as undertaking the detail design, manufacture and installation of the fabric facades, we also collaborated closely with a specialist lighting company to create the impressive lighting scheme.

A silver mesh PVC fabric was selected for a number of reasons that were crucial to the successful function of the facade. A mesh fabric allows light and air to filter through into the car park, ensuring the facade that clothes the front of the building does not create a dark and exhaust filled cavern. From inside the car park it is possible to see through the mesh fabric to the outside world, retaining an open feeling inside a ‘clothed’ building, further enhanced by the wave design which inherently creates sizable openings that also serve to improve the airflow.

Because Base were involved with every aspect of the project, from the detail design through to the installation of the fabric and lighting, the completion of the facade was completed in approximately 10 weeks, on budget and on time. The installation of the ‘wavy’ steelwork that supports the fabric was a simple process completed by a six man team working on scaffold. 120 meter long Halfen channel had already been cast into the concrete structure of the building front, requiring us to simply secure the necessary fixing bolts at specific distances before attaching the framework. The installation of the tensile fabric and lighting system was completed next using eight men and cherry picker work platforms for access, with an electrician required to complete the final wiring once it was all in place. To finish the installation four of our rope access specialists were used to fit the bird protection equipment, including wires and spikes, preventing nesting on the lighting units and fouling on the fabric canopy.

The car park has been dubbed the coolest car park in Cardiff, an easy achievement one may think. For any public car park to be labelled as cool in the first place however, speaks volumes about the success of this tensile fabric transformation. The combination of tensile fabric and lighting is an extremely powerful one, especially when used to metamorphosise a building with a colour changing, three dimensional canvas. As far as we are aware this car park is the only example of it’s kind in the world. 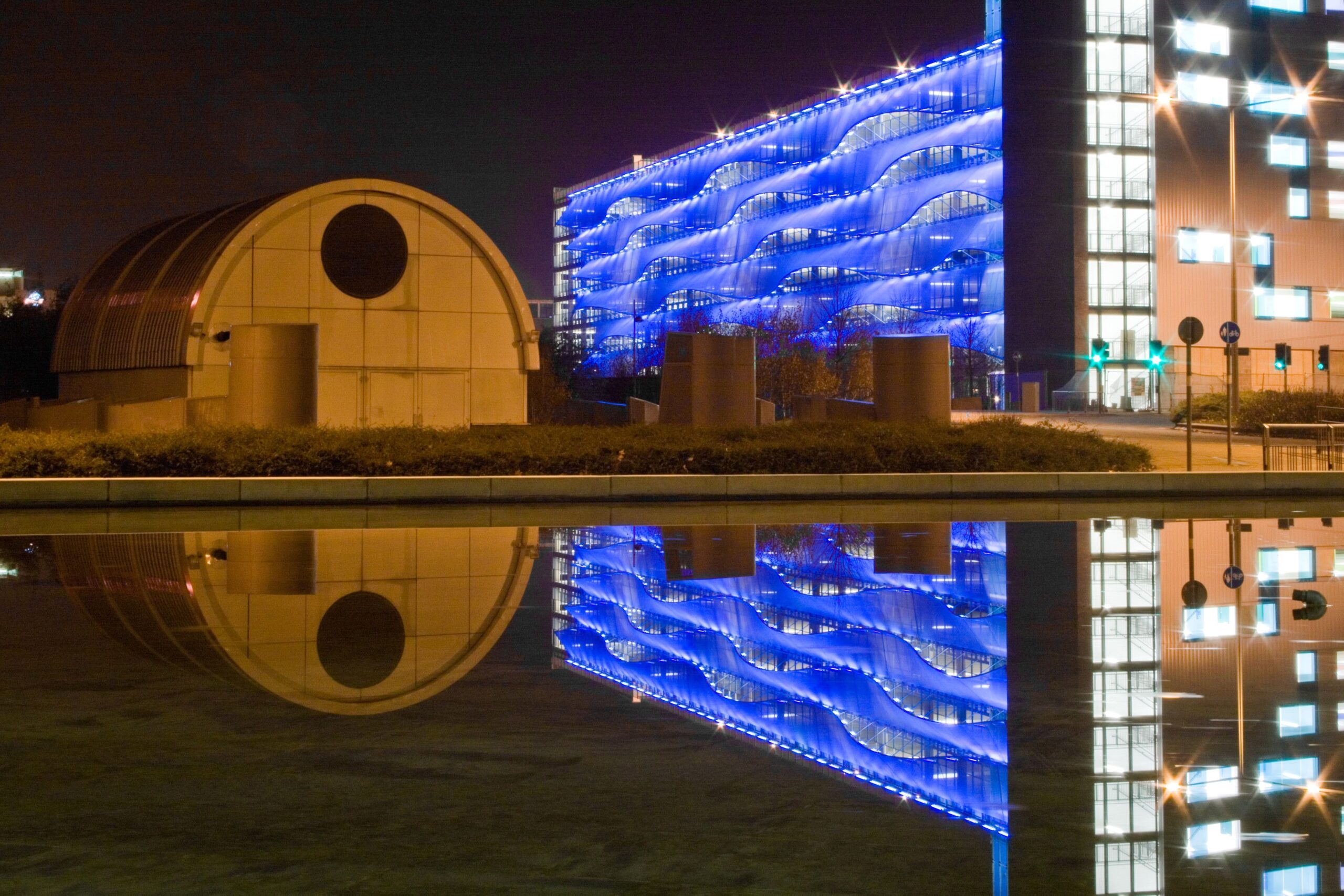 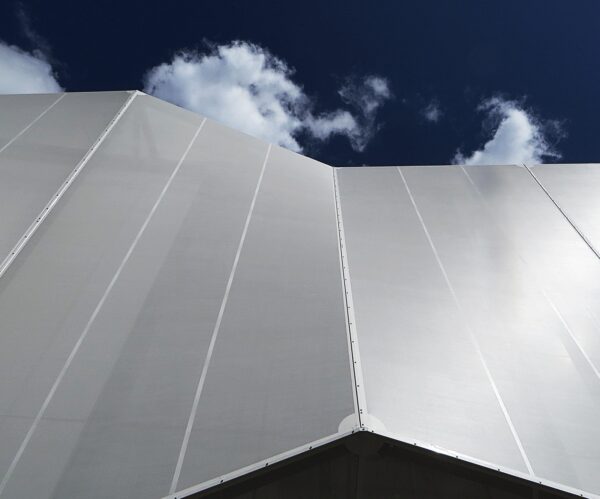 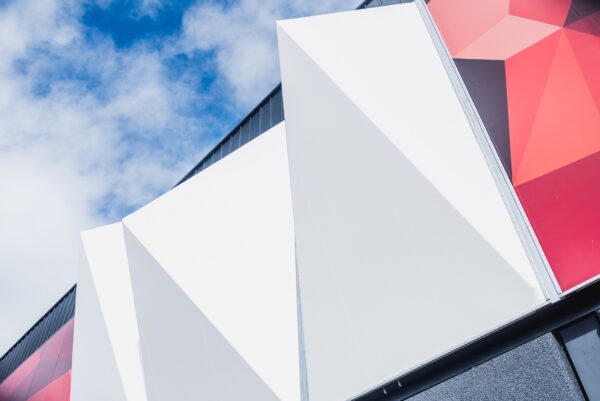 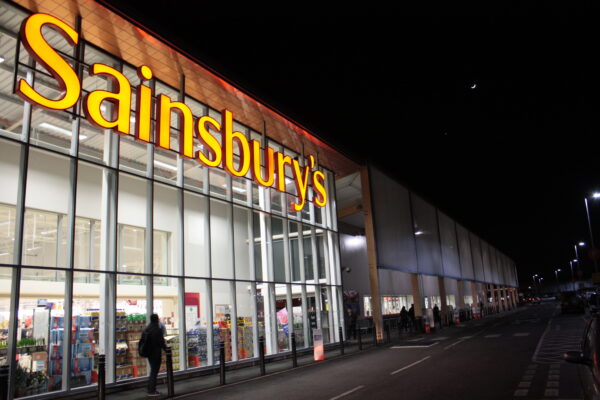